This was the gift idea I came up with for my parents this year. My parents are similar to Tony and I’s grandmothers, in that if they want it, they’re going to go get it. So the trick then becomes to find something they don’t need or know they want, but will still enjoy.
I knew my mom would either love them, or give me the look that says “really”? So I decided to roll with the idea. My first attempt bombed, I mean really bombed. I thought I would be clever and make my own stencils out of Duct Tape. Looking at the finished product I realized why this was a horrible idea! 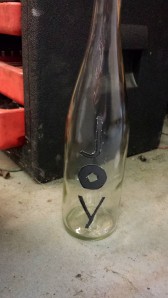 I should’ve realized at this point that this was never going to work! 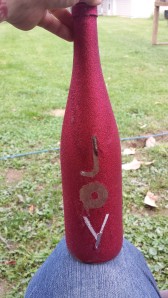 I threw this in the trash right away. Then I began the hunt for letter stickers that were big enough and that I liked.
I did eventually find some after shopping a few stores scrapbooking sections. Then I had to choose my words. The ones in the original pin, found at http://indulgy.com/post/n5Mha9AzA1/wine-bottle-decor;jsessionid=7700F05DB5080CAEEB7D4B677EBAF643, had the words LOVE, JOY, NOEL. My father is a Southern Baptist minister so I chose FAITH, HOPE, and LOVE, as taken from 1 Corinthians.

I chose three different types of wine bottles for the different shapes and the colors. You can do the same or go with identical bottles for uniformity. After you have found your stickers and selected your words, then you need some glittery spray paint. I went straight to Wal-Mart for this. I chose a gold, white and red. What you saw at the top was my finished product.
I’m not going to lie to you guys, my husband painted these for me! Apparently I suck at spray painting because yes, there is a correct way to do this! Faith came out a little weird because he forgot to press down on the letters before spray-painting. The stickers I chose would pop off from the rounded edges of the bottles, so be aware of that potential issue. We also found that the red didn’t coat as well. I’m sure with a few more tries it would turn out better, but the white was by far the best of the three.
The best part is that they were a hit. It was very funny because as my mom, the preacher’s wife, was opening the individual bottles, she was trying to guess the next word. We had HOPE and LOVE……. She didn’t guess it. She felt a little silly for not getting it, but they now have a place of honor on the mantel.
I’d recommend this for people that either have experience spray painting or know someone who does. Or you can be like me and get enough wine bottles to practice with! If you’re not a drinker, you can ask at local restaurants for empty bottles, or sometimes they will be posted for free on Craigslist.com.
If you try this one out, I would love to see how they turned out! 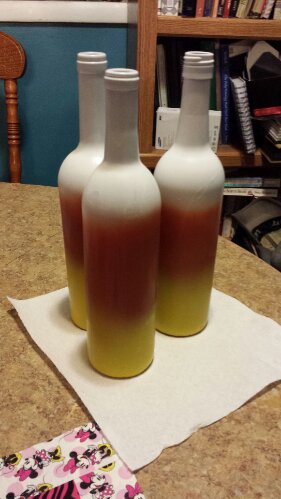 How freaking cute are these?? Adorable! I’ve been saving up wine bottles since I saw this and a few other pins. Tony has started giving me the fish-eye over them, so I figured I needed to start using them.
Halloween is my favorite decorating holiday. You can do scary, cute or funny. We add a little more to our decor each year, and we’re slowly branching out into fall decorations.
I like candy corn. Not to the extent my mom does, but I do enjoy it. I thought this would be cute for the table, so I bought myself some spray paint. It occurred to me during this process that I have never used spray paint.
First mistake I made was not letting the paint dry completely between colors, so I had to repaint.

You start with a full coat of white paint. I am still working on my skills with spray paint so there was some dripping. Tony picked on me about it, but oh well, live and learn. Again, be sure to let it dry 100%. Half an hour on a hot day, or an hour if you’re doing this early evening.

Once your white has dried, spray on your orange from a couple of inces below the neck to the bottom of the bottle. Again, let this dry completely!
Final step is the yellow. You want to hit the bottom two or three inches and try to keep your lines even when you’re doing your layers. If it’s not perfect that’s ok. Candy corn lines aren’t always straight either!
The original photo, found at http://www.seven12magazine.com/wp-content/uploads/100838479127407506_ygvrG0eM_c.jpg has an orange ribbon tied around the neck, and I may or may not add some later. For now though, it’s a cute addition to my table!
Try it out and let me know how they turn out!