How many of you have seen The Hobbit trilogy? It’s amazing! If you haven’t seen it, I would highly recommend it! The world that J.R.R. Tolkien created is vast, rich in both detail and history, making all of us long for a chance to visit Middle Earth. Preferably after Sauron has been defeated anyway!

One of the most amazing things about this works, at least from my perspective, is the characters and the relationships they form with each other. While there are love interests, Aragorn and Arwen, Kili and Tauriel, most of the relationships in these stories are those of family and friendship. In particular, I’d like to talk about Fili and Kili.

These are two brother dwarves, they are part of Thorin Oakenshield’s company, on a quest to reclaim their home of Erebor. They are descendants of the house of Durin, Thorin’s nephews.

When we first meet these brothers, it is at the home of Bilbo Baggins, during Gandalf’s arranged party. I love this picture because it shows Fili, completely confident, ready to do what comes next. Kili on the other hand looks almost nervous, which we quickly learn is not his default. He’s usually self assured and ready with a joke.

Kili was a personal favorite of mine, partially because of his love of Tauriel, but mostly because of his upbeat attitude. Even when locked in an elvish prison, he’s making jokes and flirting. Fili is a little less in the forefront of the movies, but he is a steady presence, always there for the others in the company and especially his brother.

When the company arrives in Laketown, Kili is deathly ill after being hit with a poisoned arrow. Even though they are so near their destination, the home of their ancestors, Erebor, Fili refuses to leave his brother. 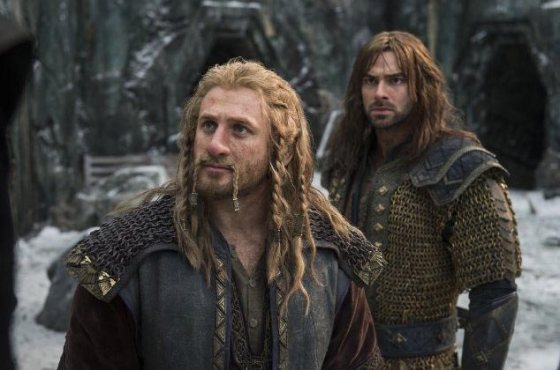 Then here we have one of there last moments together.

On Ravenhill, where Thorin has brought his best fighters, including the brothers, to hopefully kill their enemy, they’re still a team. They are ready to face whatever danger there may be together. I was devastated when Fili was killed, his body tossed to the ground like it was nothing. Seeing his brother dead, Kili leaps into a fight he can’t hope to win alone.
Luckily he is not alone, Thorin and Dwalin joining the fray, along with Tauriel and Legolas. Of course Mr. Tolkien and Mr. Jackson give us enough hope, so much that we think he may survive, only to have us see him die, right before Tauriel’s eyes.
The only solace I can take from this if that he would not want to live on in a world without his brother. Even with Tauriel’s love, he would have mourned the rest of his life.

So many books or movies today focus strongly on love stories, there are of course exceptions (Harry Potter), but being so rare, it makes these tales so much more endearing. Out lives, after all, are not strictly about romantic love. Or lives are the sum of all the love we have, from that we feel for our parents, love of siblings and friends. Romantic love should be important, but not all. Fili and Kili are the perfect example of how love can be all consuming without being romantic. Would you be willing to die for your brother (or sister)?