I have only tried making a pie once before. It was a cream cheese pie and they were a staple for family holidays while growing up. Sadly, my one attempt at this ended with a gooey mess in a graham cracker crust. That attempt was shortly after I got married and I have never attempted again. We carved a lot of pumpkins this year and I had a lot of pumpkin guts in my freezer. I asked Tony how he felt about pumpkin pie, and he informed me that he loved pumpkin pie……. Nice to know after seven years of marriage!

I wanted to try my hand at a pie for Thanksgiving and I figured if I was going to do this, I was going to go with the motto: Go big or go home! Crust made from scratch too. My mom was impressed with my daring. Pinterest is my friend and I found the “Never Fail Pie Crust” recipe. The recipe creates four pie crusts, the dough can be frozen and thawed to use later, so I have some more to use for other recipes towards Christmas.

You start by mixing 4 cups of flour, 1 tbsp. sugar and 1 tbsp. salt. After it’s all mixed up, cut in 1 3/4 cups shortening. In a separate bowl mix together 1 tbsp. vinegar, 1 egg and a 1/2 cup of water. Once the egg mixture is well mixed, all it to your flour mixture. Stir until you can form four equal balls with your hands.

When you are ready to use it, be sure your surface is well floured to avoid sticking later. Here is where a rolling pin comes in handy. I, sadly, do not have one, so I had to use a wine bottle to roll my dough flat. Tony kept laughing at me, but whatever works! My first attempt kept tearing and, after adding too much flour, I had to scrap that dough and try again with the next ball! Finally I was able to get my dough into my pretty Longaberger pie plate. I did have some holes, but was able to press the dough together and make it work. The edges weren’t as artistic as I had hoped, but it was my first attempt!

I do have some other Pinterest tips to attempt to make it prettier next time! The pie I made, more on that later, was delicious, and the crust itself was light and flaky, a definite hit! 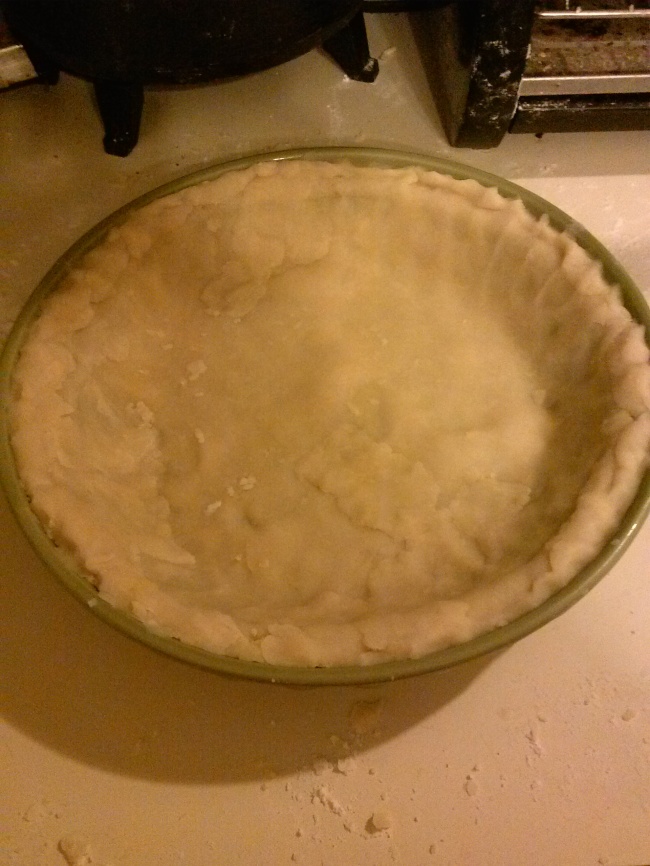 For the original site where this recipe came from, visit http://www.danamadeit.com/2011/12/day-3-never-fail-pie-crust.html

Next up, I’ll tell you all about the delicious pumpkin pie I put in the crust!