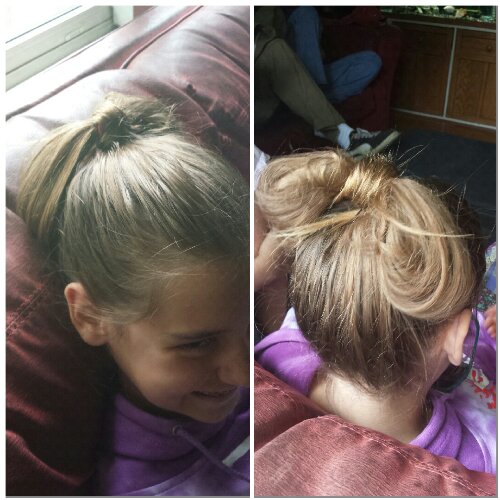 This one was a little goofy. I think with more time to play I could’ve gotten it a little better, but time with Emily was short. I took merciless advantage of her hair while she was here!
This is pretty simple, although you will want to play around to get it just the way you want it. You start with a high ponytail. You want it at least on the crown of your head, if not a little higher. The last time you pull your hair through, leave the ends caught in the front, about an inch of leeway.
You take your poof of hair and divide it in half, these will be the two sides of your bow. Then you take your leeway hair in the front and wrap it over so that it holds the division between your bow sides. Use bobby pins to hold it in place. I ended up having a little extra leeway so I wrapped it to cover the hairtie as well.
As I said, it turned out pretty cute, but I’m looking forward to attempting this one again.
Style on and let me know how it turns out!
Original pin and directions at http://longhairstyleshowto.com/bow-bun-tut/

This has been on my Hairstyles & Makeup board for a little while now. Obviously my hair is too short for this now, and I honestly don’t know if I could manage to do this to myself anyway!
I don’t know if you can tell by the pictures, but I ended up using Chiara’s Rapunzel doll.
You start by taking two pieces from each side of the head. The piece in your left hand, curl into a loop. The right hand needs to be pulled under the loop, as demonstrated in picture 1.
The second step is to take your right piece an twist it over the bottom piece of the loop, as shown in picture 2. Continue twisting that same piece until it curls under the pulled back piece on the left side. See picture 3. The directions sound complicated, even to me, but the pictures should really help! Remember how you pulled the left piece under the loop? Tug that piece, ever so slightly up through the loop. Just a little, as shown in picture 4. Feed your top piece under that pulled up piece and tug it down. It’ll look something like picture 5. Adjust your knot to suit yourself, hopefully it’ll end up looking like it did in final number 6!
I found the overall process was made easier by twisting the pieces. It makes them a little easier to maneuver.
I thought this would be difficult, and I’m not going to lie, I’m glad I had a doll to attempt this on. Chiara would never have sat still for this one, and I tried bribing her with cookies! Let me know how your attempts turn out.
To see this style on human hair, check out http://web.stagram.com/p/391864081600562324_17025592
Check out some other hairstyle ideas on my board. Follow Stephanie DeSantis on Pinterest

This was a purely indulgent Pinterest moment. I was probably just as shocked as everyone when Emma Watson chopped her hair off. At least she didn’t go insane and shave her head like Brittany Spears, but I can definitely understand wanting a change after being forced to keep the same style for over 10 years!
I’ve changed my hairstyle over the years. Mostly it’s kept between my chin and shoulders. It rarely gets longer than that because I get frustrated with it’s slow growth so I chop it off. It’s a little stupid on my part, but women are not expected to be rational!
The most drastic thing I’ve done before now was going “Alice” with her cut from the first Twilight movie, but I wanted a change, and with my birthday coming up (my usual change-up time), I figured, why not?!
I ran the idea by my husband, mother and close friends and I got the same response from everyone: don’t! I’ve never been one to let other people’s opinions slow me down, so of course I went out and did it anyway.
I had a ton of dead ends from chemical stuff I’ve done to my hair (dye jobs, perms, straightening) so I figured I’d kill two birds with one stone, and get rid of the bad and start fresh!
I’ve also started another pin-tip, so there will be follow-up on how to have healthier hair, depending on how it turns out. I guess the point I’m trying to put across with this pin is that you should try what you want to do. Am I in love with this hair cut? Not overly, but you know what, live and learn! It’s a change, yes, but it’s not permanent. Hair grows back, so this will end up just being a fun time to look back at, possibly wondering when I lost my mind. LOL
Positive note: My Hard Rock Café hat looks fantastic with this cut!
Original photo inspiration came from http://29.media.tumblr.com/tumblr_m13kx7YdjJ1rnz2zeo1_500.png

I love easy hairstyles. I’m really glad I tried this one before I chopped all my hair off too because it is really cute. I didn’t do it quite like the picture, mainly because I’m not talented enough to do that to myself. Once again, I’m struck with the knowledge that I need a test subject!
It’s another style that if you can handle a French braid, you can handle this. The only difference is that you only add hair from the bottom instead of from both sides. If someone isn’t looking closely, it looks like a regular braid, but if you look closely you can see the difference.
It’s nothing super special, but it is always nice to have variations on a classic. I can’t wait to try this on someone else, maybe play it up a little more like the original pin!
Original pin can be found at http://www.bloom.com/trends/?fm=braidsandponytailspv
The website is a little difficult to navigate and I couldn’t find the directions to this exact hairstyle, but lucky me, the directions were attached to the pin.
Follow me on Pinterest at ads061006
If you want an invite to Pinterest, just let me know!

I’ve been playing around with something like this for a while now. I actually styled most of my bridesmaids hair (with the assistance of Mrs. Doris Page) with the upside down braid, but instead of a bun, we curled the top and pinned them down. It was really pretty.
I think I like the curls instead of the bun because it helps hide the bumps on the side. Yes, I did this myself so doing this on someone else you can control the side bumps a little better, but still. On the other hand, the bun really shows off the braid. My husband says it’s goofy, but he thinks most things I do to my hair are a little goofy.
If you can French braid your own hair, this is a piece of cake. You just flip your head over so your hair is hanging towards the floor, then start the braid from the nape of your neck. Once you get to the crown of your head, you tie it off. Then you brush the front of your hair back into a high ponytail, combing with the hair from your braid. I ended up using a hair-tie to wrap my bun up because I was a little too lazy for bobby pins.
I think this is something I’ll do again, and maybe with a little practice, it’ll be something I can do when I’m planning on leaving the house. Good luck to all who attempt this, as always, with any hairstyling, it’s practice, practice, practice!
Original pin found here