June 10th finally arrived! This year it wasn’t just about my anniversary, Tony and I have been married 13 years now, but we were leaving for Italy! I had been planning, plotting, and in general losing my mind about this for months. I was finally going on my first international vacation!

A friend from one of my Facebook groups was supposed to be taking us, but I kept getting all these weird messages from her, making me think she had to bail on us. Neighbor John to the rescue! While we were loading our van, the online friend showed up, yelling about how I ruined her evening, but I was flying high already, so we didn’t even look at her, and she left.

On the way to the airport, we got an alert that the flight had been delayed an hour, but no worries, as they had already bumped us to the next connecting flight to Rome. At the airport, printed our tickets, through security, then to the terminal to wait.

We needed an anniversary shot of Tony and I for posterity

We boarded the plane, both kids squirming in excitement because this would be the first flight Arthur would remember, and Chiara’s first flight ever. Then out on the tarmac, the captain made an announcement that we would be on the tarmac for about an hour. The weather in NY was too foggy. Everyone on the plane handled it well, my mother especially, talking to everyone within a three row radius.

Look how excited he is!

We finally made it to NY, but were left rushing towards our next flight with no hope of making it. At least nine people missed that flight by a window of twenty minutes. Ugh! The next flight to Rome wasn’t until 4:25 the next afternoon, meaning we were losing an entire day in Rome, a night at the hotel, and would now be rushing to our first tour. Double ugh!

We were able to find a hotel close to the airport, they sent a shuttle to retrieve us, so we at least had a place to sleep that night. Once we got to the room, Josh, my brother, and I walked down to the 7-11 to hopefully find some food at 11pm. They actually had a great selection of fresh food available, including a pizza they cooked fresh for us!

We woke up around 9am the next morning to make our way back to the airport. We then spent the next six hours wandering the JFK airport and hanging out in the USO. 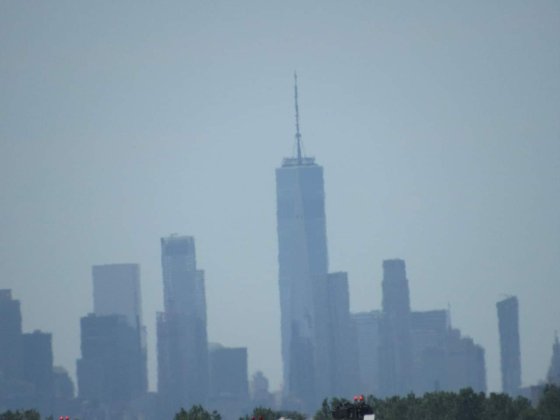 My first time seeing the One World Trade Center

Another bummer to being bumped on an airline is that you will most likely not be sitting with your party. We only had two seats together, so Chiara and I took those. My mom was able to get someone to switch, and had Arthur next to her. Tony and Josh were sitting solo. Sleeping on the plane was impossible for all except Josh. Marine training, and time in a war zone, allows him to sleep anywhere.

So there we were, arriving in Rome, our tour starting in just two hours, running on no sleep. Let the fun commence!