Wow, it’s been forever since I blogged. I took some time off to work on a project of mine. I’m making some progress, but I find that I do miss blogging about my Pinterest adventures! I don’t think I’ll go back to the daily blogs, but at least a few times a week.

Everyone knows what this is. I love the minty sensation it gives me, and although it probably is weird to admit, I love the smell.
This time of year, chronic coughing is like a plague. Tony gets it and I’ve learned to deal with it. One of the kids gets a cough and I lose my mind! The last time Arthur had a bad cough, almost 3 years ago and he ended up throwing up.
A few nights ago, he started coughing really bad. I remembered this pin, linked to http://tiffkeetch.blogspot.com/2010/02/cough-remedy.html?m=1, that I had pinned a while back. I forced Tony out of bed to go get some Vick’s.
When he got home, Arthur was already up, so I went to sit on his bed and smeared a thin layer of Vick’s on the soles of his feet. After getting through the giggles this caused, I put a pair of socks on his feet. 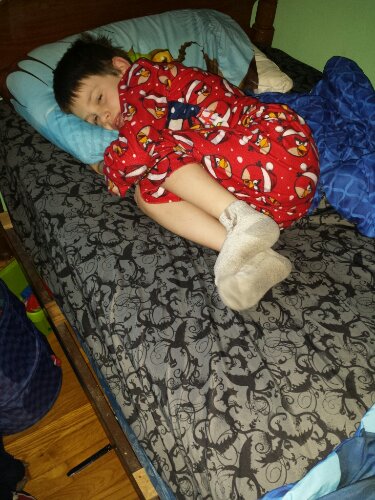 Yes the socks are stained, but the boy plays hard and dirty. Tony and I laid in bed and listened to the coughing, slowly counting down the 5-15 minutes this is supposed to take to work.
Then, nothing! No coughing! It was amazing how it kicked in almost immediately. We did this two nights in a row until his cough ran it’s course.
It is important to remember this is not a cure for an actual illness, it just treats the symptoms.
The original blogger says they’ve been using this for adults with success as well, but when Tony tried it, there was no change. We’ll probably try again with a thicker layer of Vick’s. If you have little ones at home, definitely keep this in your repertoire!
Stay healthy!