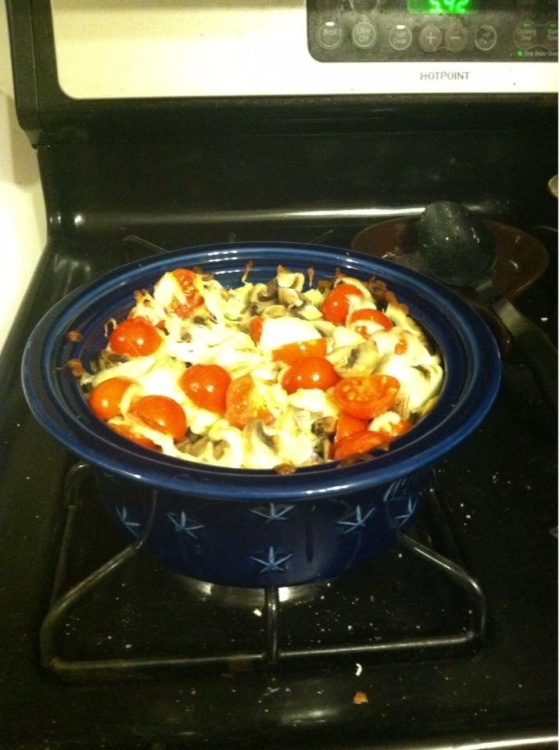 I’ve made this several times since pinning. I’m still fiddling with the seasonings each time. It has a great taste that we love, but it’s missing a little something.
To make this delicious yumminess, you brown 4 skinless, boneless chicken breasts in a pan. As per my norm, I cubed my chicken. Then you put the following into a blender: 4-5 garlic cloves, 1 cup fresh basil, 1 tbsp olive oil, 1 tsp balsamic vinegar (I’ve been slowly adding more of this each time, the taste is only getting better) and 1/4 cup water. Pulse it until its puréed.
Put your chicken into your casserole dish, I like my round Longaberger one because 9×13 just wasn’t as visually appealing. I know it’s silly, but oh well! Pour your puréed mixture over your chicken. Layer 1 cup sliced mushrooms, 1/2 a red onion sliced and a package of cherry tomatoes cut in half over the top. Sprinkle with shredded mozzarella and bake at 375* for 40 minutes.
Like I said earlier, it’s very yummy, just be ready to experiment a little to get just the right flavor.
Enjoy the yummies!
Original pin can be found at http://shellyheim.com/2012/08/31/balsamic-vinegar-chicken/

This one has been pinned for a while, and I just never got around to it. Tonight is the night!
My girlfriend Jenna was over today with her son Oliver. We were fine tuning some ideas for our vacation next summer. The original thought was pizza, but then I thought, casserole!
You start by making some pasta. The recipe calls for bowtie, but I had penne rigate, so that’s what I used.
Then, in a separate pan, fry up a diced onion, 2 tbsp of chopped garlic and 1 tsp dried oregano with some Italian sausage. You will have to squeeze the sausage out of the skin-like tube. It’s kind of fun, if a little gross looking!
Then you start layering the ingredients in your casserole dish. In retrospect, I should’ve used my deeper Longaberger one, mine overflowed a bit.
You start by putting a layer of sauce on the bottom of your dish. We used Hunt’s traditional pasta sauce. Then a layer of pasta, your onion and sausage mixture, some Parmesan cheese and more sauce. Layer some mozzarella cheese over that. Then you put another layer of pasta, layer on some cubed ham, more sauce and Parmesan cheese. Last of the pasta next, followed by sauce, cheese and top it off with a layer of pepperoni.
Put this delightful mix into the oven at 375* for 40 minutes. Let it cool for about five minutes then dish it out.
If your layers don’t come out perfect, or if you want to add or leave something out. Feel free! Like any pizza dish, I feel it’s dealer’s choice!
Jenna and Alan’s opinion, definitely going in the basket! Most likely a vacation choice too!
Original recipe can be found at http://cullyskitchen.com/3-meat-pizza-casserole-recipe/