This was a nifty little recipe I got from here.
For this recipe, you will need:
•2 cups flour (recipe called for whole wheat, but I used regular)
•2 tsp baking powder
•2 tsp sugar
•1 tsp salt
•1/2 tsp rosemary (recipe called for fresh sage, but I didn’t have any)
•1/2 cup canola oil
•4 eggs
•1 1/4 cup milk
•1 red bell pepper all diced up
•1 lb. cooked sausage
Start by mixing your dry ingredients together, then mix in your eggs, oil and milk. Add in your sausage and pepper last. Grease up your muffin pan and fill them 2/3 full. I’m sure I went a little over, but they turned out awesome.

Bake the muffins at 375° for 20-24 minutes. I made up about 24 muffins with this sized batch.
Let the muffins cool completely before bagging them up for freezing. I don’t know if they actually need to be frozen, but with the meat in them, I didn’t want to take any chances. 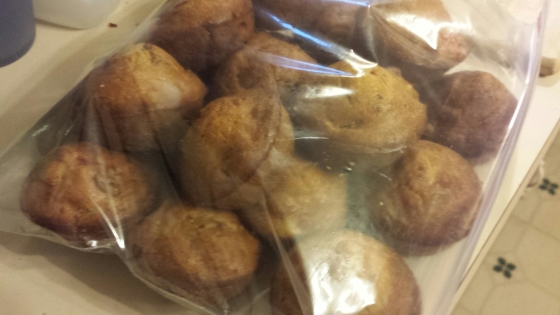 I just used a gallon ziploc bag to hold them all, then into the freezer they went.

After we sampled a few of course!
This morning I simply tossed one in the microwave this morning on defrost for a few minutes, a little over 2, and had a yummy breakfast on the way to work.
I wish you all a happy morning!

This isn’t a Pinterest item, but my love of bread has overtaken me today, and luck was on my side because I had bananas in the house! If you’ve read any of my previous blogs, you know I’ve done a lot of bread recipes! This is a recipe that I got from a dear friend of mine from New York. Tom Page, thank you for the many delicious servings of this that I have consumed!
You start by beating 5 large bananas, the more overripe, the better the bread will be, until they are almost liquefied. Beat in 4 eggs until the mixture is well blended. In a separate bowl, cream together 1 cup of shortening and 2 cups of sugar. Once it’s a fluffy combination, add it to the banana and egg mixture. Add in 2 tsp baking soda, 3 1/2 cups of flour and 1 tsp salt. 1 cup of walnuts is optional, I used to leave them out because Tony doesn’t like them, but he hasn’t been eating a whole lot of my last few batches so the kids and I are adding walnuts!
I used to do 1 big pan of bread and that cooks at 300* for 1hr and 15min. Here lately, I’ve been doing 4 small loaves which I bake for 45 minutes at 300*.
You can probably tell by the picture that my bread overflowed a bit. It’s the first time I’ve had that happen, and I’m not really sure why, but we will still eat the heck out of it.
This is the most delicious banana bread I’ve ever had, and that includes the stuff they sell at Starbucks! It’s a great breakfast item too. Slice a little piece off and slather on some butter and you are in for a treat!
Happy Baking!

This one was easy so I didn’t wait to long after pinning to try. I’m a big French toast fan, so I figured that if this one turned out good, my life would greatly improve. Throw this together the night before my day off and them have a leisurely breakfast the next day. That’s what I loved most about this one. No standing over the stove first thing in the morning, just whisk together the ingredients and let the crockpot do the work!
You take 1/2 a loaf of bread and tear the pieces in half. Whisk together 6 eggs, 2 cups milk, 1 tsp cinnamon, 1 tbsp brown sugar and 1 tsp vanilla extract. Dunk your bread in your mixture, then later it in your crockpot. When your done, pour the remaining mixture over the bread and let it cook on your lowest setting for 6 hours, or overnight.
The taste was amazing, all of us cleared out plates and Chiara and I had seconds.
I’m not really sure that I’ll make this one again though. The texture was a little off putting. The original pinner did say it was soufflé like, but having never had soufflé before, I don’t know what that is like. I like my bread to not be quite so soggy. I did love the taste though, so I will definitely keep the mixture recipe!
Check out the original pin at http://thecakeeccentric.wordpress.com/2010/12/05/brunch-crock-pot-french-toast/
Look Stephanie DeSantis up on Pinterest and follow me, maybe offer tips on which pin to try next!

It hasn’t come up yet, but I am primarily of French descent. It makes it really fun to mess with everyone at work, who is primarily Hispanic or African descent. They pick on the fact that I use my hands when I talk, a very Gallic (and Italian, but for the sake of the argument) habit. When they start a Spanish conversation I love to respond with something in French.
One thing about the French, something that no one can deny, is they make amazing food! Most people think of New Orleans when they think beignets, but it is in fact a French food, albeit it’s been ‘colonized’!
Of course I had heard of them before, but since I had seen The Princess and the Frog, I have been dying to try them. My newest response to wanting to try something: Pinterest!
This recipe is pretty simple, it just takes some planning!
You start by mixing together in your mixer, with dough hook attachment: 1 cup lukewarm water, 1/2 cup sugar, 1/2 tsp salt, I large egg beaten at room temperature, 2 tbsp softened butter and 1/2 cup evaporated milk.
I had a moment, thinking I had evaporated milk, when in fact I had condensed milk. After a quick Internet check, I was assured that UNsweetened condensed milk was interchangeable, but sweetened, what I had, was not. I decided to risk it, and everything turned out great!
Once it’s all well combined, form an oval and place it in a lightly greased bowl, I used a little extra virgin olive oil, and cover with plastic wrap, I used a dish towel. Place it in the fridge for 3-4 hours, or overnight. I did the overnight so we could have them for breakfast.
After they’ve refrigerated, roll out your dough to 1/2″ thickness, cut into squares or circles about 3″ big. Fry them in oil till golden brown on both sides, then sprinkle with powdered sugar.
The kids and I made absolute pigs of ourselves! Even my friend Jenna’s little boy Oliver, who’s only a year old, ate four!
I will definitely be making these again in the future! And what did we watch while devouring these?? Princess and the Frog of course! I wonder if they were as good as Tiana’s??
Original pin containing recipe and history of beignets can be found at http://whatscookingamerica.net/History/BeignetsHistory.htm