This game ended up being more fun than I expected. When I first had this idea, my Pinterest brain immediately jumped to cutting shapes out of a tarp for targets. Then Tony informed me that our soccer goal has this attachment with cut outs already in it. Awesome!

Start by having the kids make monster faces. If you know anything about Sailor Moon, you’ll know that the monsters range from scary, to pretty, to just plain weird. I just had ovals, kid-face sized, ready for the kids to draw on. Then attach a string to the face to hang on your monsters on your target.
I hit the Dollar General for some flying rings, the frisbee rings, whatever you want to call them. Another Sailor Moon tidbit, for those who don’t know, when fighting monsters, Sailor Moon takes her tiara off, it begins to spin, then she throws it like a frisbee. Once your monsters are attached to your targets, the kids can now line up and throw frisbees at the monsters, just like Sailor Moon!

I think of all the games we played at Arthur’s party, this was the biggest hit. Nothing more fun than shooting Nerf guns after all!

First things first, you need to make your Tie Fighters. I just used cardboard and super glue. It may not seem sturdy, but these held up to a deluge after the party was over! You cut out your hexagon ends, then a connecting piece with a circular shape in the middle. Super glue the pieces together as shown, then spray paint them black and you’re set!

To mount these Tie Fighters, I skewered them with simple wooden grilling skewers and stuck the skewers into garden stakes. They spun around in the wind, and the effect was really cool!
To finish up this game prep, just gather your Nerf guns and let the kids open fire. When we had a little time leftover, this is what most of the kids went back to. No higher praise among 10 year olds!
Have fun, and stay strong in your fight against the Empire!

This is another game that I pulled together last minute and meant to play up a little more. *sigh* Remember the scene from Rogue One where the rebels have landed on Skariff and they are setting off bombs on the different landing pads to create a distraction? That’s what I was going for here.
All you need for this game is:

• a marker for the kids to stand behind (I used the signs my kids got from school for being awesome)
Then you line the kids up and have the kids try to bomb the landing pads. My baskets kept flipping over when they were hit, so if we do this again we’ll have to weigh them down. You also have to watch the kids like hawks to ensure they don’t try to throw balloons at each other. My husband also thought it was funny to throw them over the house when we were all playing in the back yard. He almost got one of the moms!
Have some fun, maybe decorate the baskets like landing pads, but enjoy some Rogue One fun!

I will be the first to say that I pulled the Rogue One games together last minute! That being said, Pinterest had no useable ideas for party games with this theme. I know, I was surprised too. Everything Pinterest gave me had a Jedi theme to them, which Rogue One does not have. My son’s choice, but as my sweet baby Arthur turned 10 this year, I had to wing it! I was playing around with assorted ideas for what would work and here is the first one I came up with.
Remember the scene where Chirrut crosses the open space, while Storm Troopers are firing, chanting “I am one with the Force, the Force is with me”, and manages to activate the Com switch? I decided to have the kids walk a plank of wood, blindfolded, and they had to slap the “com switch”, in this case a Foldgers coffee can. As much fun as it would be to be shooting at the kids while they were walking, I thought that would’ve been a bit much.

I was working with what I had on hand, so the board probably should’ve been a bit longer, but it was funny to watch them wave their arms around trying to find the coffee can.
All you need for this game to work is:

•a plank of wood, wide enough for the kids to walk on safely (probably best to leave it on the ground to avoid potential injury)

•a stick (more to simulate Chirrut in the movie, but it can be used to find the Com switch)

•a blindfold (we are simulating a blind guy after all)

•a small table or stool with a switch or something the kids can smack (try to aim for waist height on the kids)
Then you’re good to go. Have fun with it. These kids sure did!

I had a difficult time coming up with games to go with Chiara’s Book of Life party theme. I rose to the challenge, even if it was last minute! In addition to Pin the Flower on La Muerta, I found a way to ‘bull fight’.
All you need for this game is 10-12 cups that can get banged around a bit, I had my spray painted Olive Garden cups from last year’s game Knock Down the Ice Palace and a ball.
I printed off 12 pictures of the bull from Book of Life (they look funny because I was running out of ink) and taped them to the cups, using my perpetual favorite, packing tape. I also printed a picture of Manolo and taped him to the ball. I had to add a few straight cuts so that I could make him lay flat on the ball. The cuts allow you to overlap pieces of the image and prevent bunching. 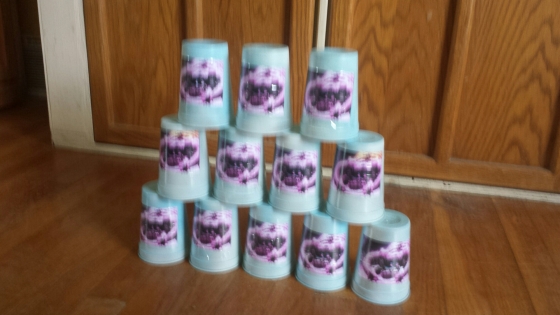 …..go fight some bulls!
Simple and entertaining. What more can you ask for a kids party?

If you like toss-across or cornhole, this is a great game! I got the idea for this game from a pin on Pinterest, shockingly.
I started by taking a giant piece of cardboard, we recently got a new door, so I had a monster one, and folded into a triangle. I then went ballistic with duct tape!

The kids thought this was a tent, so we had to play for a little bit, obviously! I have a bunch of different colors of duct tape, leftover from when I made my duct tape flowers, so I used blue for the sky and green for my mutant looking grass.

My next step started with me buying a new printer as our old one died and was never replaced. Then I discovered the joys of wireless printing from my phone, as I printed out full size pictures of the main dragons. Once they were printed, I cut them out and used packing tape to put them on my cardboard tent. 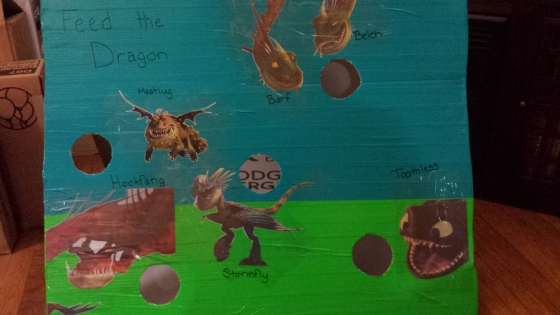 After the dragons were attached, I cut holes, which we later had to enlarge, that the kids could throw their “fish” through. The original pin had the mouths cut out, but I couldn’t get the dragons big enough for that to work.
I went to town with my sharpie next, writing the dragons names and writing the name of the game.

These are probably the ugliest “fish” ever used in a game, and I mean ever, but I have no sewing skills, and had no time to torture my husband into it. I took some of Arthur’s holey socks, thoroughly laundered, so don’t get grossed out, filled them with rice and tied them off. I drew little eyes on them with a sharpie to make it even worse!

The kids were enjoying themselves, even before Tony enlarged the holes, making it possible to feed the hungry dragons. You may be able to see in the above shot, at least a little, but we did reinforce the box against the beanbags with additional pieces of cardboard acting as braces. They were held in place by our favorite accessory, duct tape!
If you decide to make and play this game, I hope you have as much fun as we did with it!
Play on everyone!