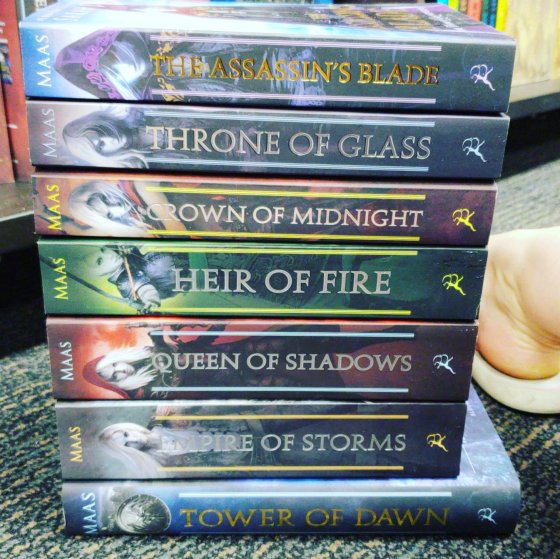 Sara J Maas. Have you heard the name yet? If not, you need to know that shes a brilliant author! She’s written the Court of Thorn of Roses trilogy and the Throne of Glass series. It’s the latter that I want to talk about today, since the last book of the series comes out in October! Kingdom of Ash has so many storylines to wrap up and it will have to be the most epic thing she’s written!

Throne of Glass, technically, starts with the book Assassin’s Blade. It is not one long story, but rather five short novellas that are a kind of prequel. You are introduced to characters who become important later on. I really recommend this as your starting point!

The first real book is Throne of Glass. It stars Celaena Sardothian, an amazingly efficient and smart alec assassin, the very best of Adarlan, who is released from the salt mines, where she was a slave. Her freedom comes at a price though, she must enter a competition to become the king’s champion (assassin). Prince Dorian and his friend Chaol, the captain of the guard, bring her back to the kingdom. The competition reveals many of the kingdom’s secrets, which sets up the rest of the series.

Crown of Midnight, book two, still follows Celaena through new adventures and devastating heartbreak. Characters we love leave us, causing Celaena to start down a new path, or a very old one, depending on how you look at it.

Heir of Fire brings Celaena to a new kingdom, new characters, and secrets revealed. Rowan, a fae warrior, comes on to the scene and he is a very harsh male. I will ask you to be gentle with him, he has reasons to be the way he is.

Queen of Shadows brings even more new characters, new problems to be solved. Celaena, or Aelin, is trying to do the right thing, for both her friends, and the kingdom, but her means are unbelievably crazy. The plans work out though, so stay with her to the end!

Empire of Storms will break your heart. It is amazing, and we get to know some older characters much better. Elide and Lorcan are my personal favorite as far as unlikely allies. There are many of them in this book. Enemies work together to try and stop a greater evil and ot makes for a great deal of reader entertainment! Remember, heart break, but worth it!

Tower of Dawn made a lot of readers angry. It’s just as brilliantly written as everything else, but at the end of Empire of Storms you have beloved characters in dire straights, only to skip back in time. We join Chaol on the southern continent and meet a whole new cast of characters. Chaol and Nesryn, another character from Adarlan, are in Antica to heal Chaol’s injury, and to hopefully raise an army to fight the evil trying to take over. Give this book a chance and, if nothing else, tell yourself that you need to know these characters before Kingdom of Ash!

Enjoy the books! They are beautiful and the although the stories can pull at your heart, they will also lift you up. My two favorite quotes from this entire series are

“The world will be saved and remade by the dreamers.”

“You could rattle the stars. You could do anything, if only you dared.”

Those two quotes can see you through almost anything, and there are many more inspiring quotes to be had. Along with funny and quippy ones. Have you read these books? What did you think?