It’s been months since we were in Florida, but I still remember how much fun we had! Then I looked and realized I never fully blogged about our trip. Bad Stevie! I did briefly talk about Epcot, and how we drank our way around the world. There is so much more that we did that day!This trip to Disney started with a lot of planning. Our first Disney trip, Epcot was a half day, boring stop. After hitting Pinterest, I came up with the following itinerary. 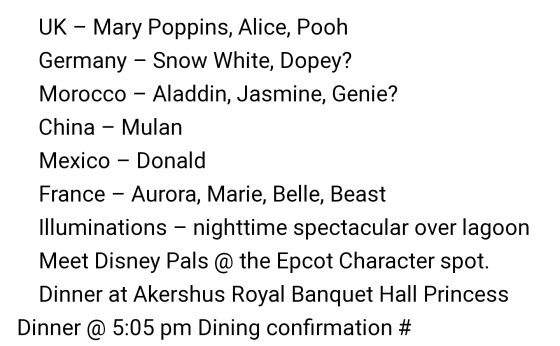 Mine was handwritten, then my mom did her thing to make it pretty.

I usually try not to start days like this in the gift shop, but we needed to so we could buy the kids passports.

The passports come with stickers, featuring the flag and different sites from that country. As you go around the world showcase, you stop at each KidCot station and someone will write a little note in the native language. 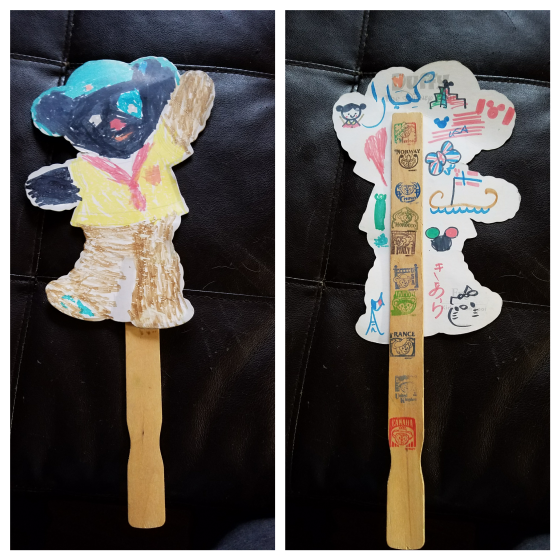 If you don’t want to get the passport, you can pick up a Duffy fan for free at any station. Chiara wanted the fan, as well as her passport, mainly so she could color it!

The itinerary was set, but as usual, we didn’t get to everything, but here was our day by country:

MEXICO: Here we only stopped for a drink, churros

NORWAY: Norway included a visit with Anna and Elsa, easily the most beautiful Elsa I’ve ever seen. My brother was enchanted.

We also rode the ride Frozen Ever After, it’s a really fun log ride! KidCot station, drink and moving on!

CHINA: China was a fun country. KidCot, drink, but with the addition of a lunch stop. Who doesn’t love Chinese food? Then we made a stop at the gift shop for some fans. If you buy a fan, be sure to ask the workers to write your name in Chinese on the fan. Here is mine:

AFRICAN TRADING POST: There was no KidCot station here, but Chiara had a lot of fun playing the drums while the grownups enjoyed their drinks. It’s vacation and we’re outside, play on!

GERMANY: I was really looking forward to Germany because I read about a shop called Karamel-Küche. I think it is really expensive, even for Disney, since this delicious strawberry cost $5 alone! Tony was really excited to find liqueur chocolates at another stand too. KidCot, drink, and moving on!

ITALY: Italy is a personal favorite, after all, I married an Italian!

The kids enjoyed gelato while the adults had their drinks. Quick stop at the KidCot station before moving on.

THE AMERICAN ADVENTURE: This was a time of catch our breath and let the adults recover from the drinking. Arthur enjoyed copying Uncle Josh’s meditative rest. Then it was KidCot, an American beer and onward! 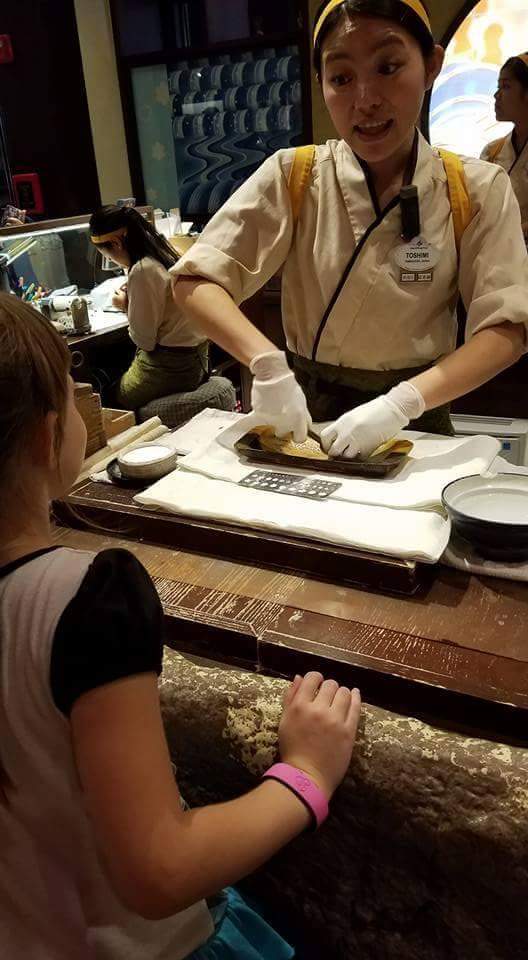 JAPAN: Chiara really enjoyed Japan! When traveling through, we stopped at Mitsukoshi. Here, you get to pick out an oyster and keep the pearl found inside. Chiara got a very pretty silver colored pearl and she chose a small glass bottle I think purple sand or hold it. They have many settings available for your pearl, including Cinderella’s carriage! KidCot, alcohol, then moving on. 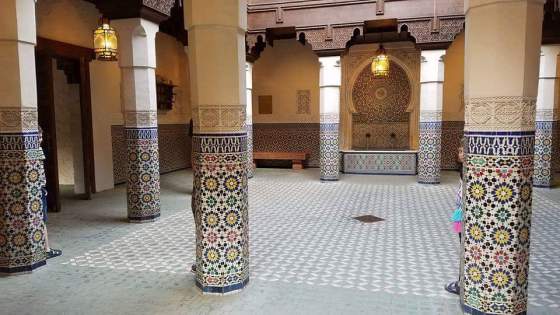 MOROCCO: Sadly we missed the meet and greet with Aladdin and Jasmine, but we enjoyed the mosaic work here. KidCot was fun, I especially enjoyed learning the words they featured. Drinks and then onward.

***We backtracked to Norway at this point for dinner at Akershus Royal Banquet Hall for our princess dinner. This was another big treat for Chiara because we met Belle at the door and during dinner, four different princesses came to our table.

Dinner was delicious, meeting the princesses was really fun, then we were on our way again.***

FRANCE: Walling to France after dinner (that’s fun to say), Chiara saw Aurora, then the Princess took her hand and led her right to the front of the meet and greet line. Chiara was in heaven! I always love seeing he mini Eiffle Tower in France! The fountains and architecture here are very beautiful as well. My brother treated us to mini eclairs while here and they were delicious. KidCot, alcohol and continue on. 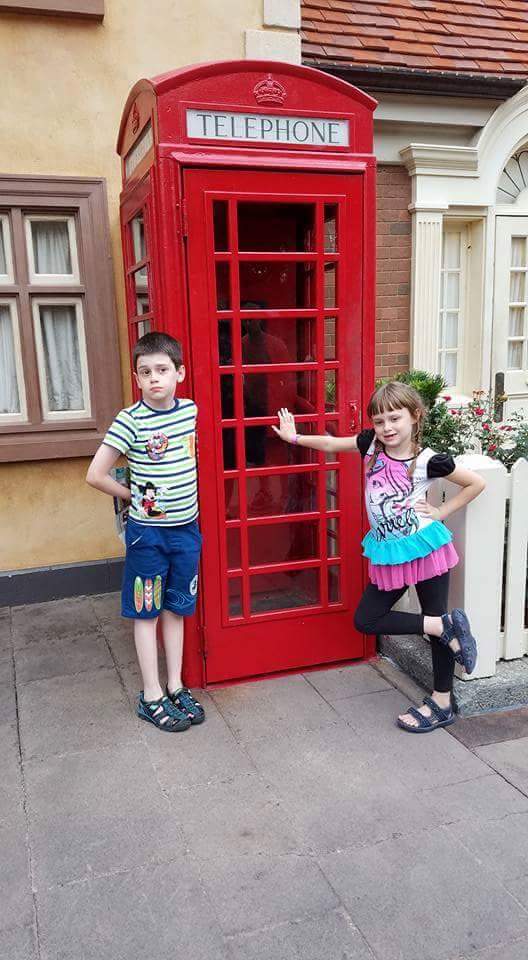 UNITED KINGDOM: Those of us that were drinking hit the Rose and Crown Pub for our beverages and the pub itself was beautiful. Exactly what I think a pub would look like in England! The kids enjoyed playing in the phone booth before we hit the KidCot station and then we were off of our last country.

CANADA: Canada wasn’t super thrilling, mainly because we lived near Canada for so long. We did however meet some really fun French guys, who worked at Epcot, and had a nice long talk with them before the light show began. KidCot, a beer before last call, then off to find our place for the Illuminations show. 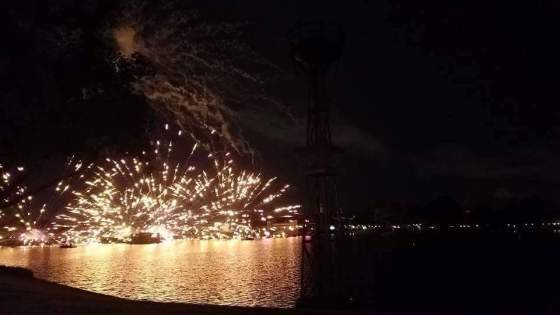 The light show was fabulous! The giant globe on the water moves around, lasers shooting through the air, fireworks, music and projection images on spraying water. Definitely worth staying late for the show!

It was such an amazing day! With a little planning Epcot can be so much until, so take a little time, make your own itinerary and enjoy!

One thought on “A Day at Epcot”