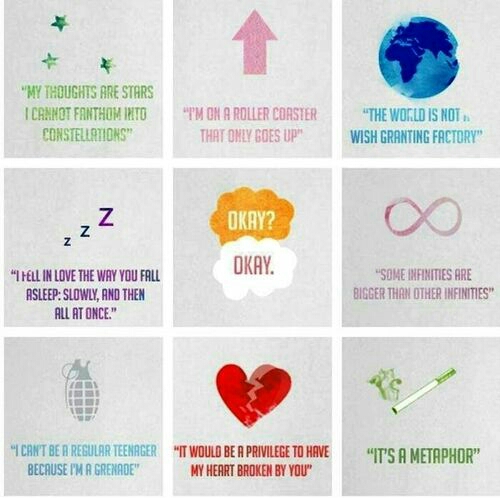 This book destroyed me! It made me laugh and cry at the same time. How is this possible you ask? Let me tell you…..
This is a story about cancer. It sounds outright depressing, especially considering in the first few pages you learn that Hazel Grace, our female lead (not really a heroine), has terminal cancer. Terminal as in you don’t talk about IF you’ll die, it’s WHEN.
She comes across as adjusted. Having never had cancer, I can only speculate that that would be a good thing. Able to joke about your impending death, while still living your life. Getting her GED and even taking college classes. Only downside to the cancer, aside from dying of course, is cancer group.
According to some of the extras I’ve read and seen, cancer support group is actually a good thing, this fictional one was awful! Except for Gus that is.
Gus, Augustus Waters, develops an instant attraction to Hazel Grace. Having gotten in the habit of defining herself by her cancer, Hazel enjoys this, before deciding she wants to limit the damage she causes. She knows her parents will be devastated, but there is no reason to spread the damage beyond that.
Gus refuses to accept that. Being cancer free for 14 months, losing only a leg in the battle, he remains upbeat.

I’m on a roller coaster that only goes up

The budding romance is beautiful and tragic, even more so than Romeo and Juliet because you see it coming.
When it does hit though, it is from an unexpected direction. As soon as I realized what was going to happen, I cried almost the rest of the book.
Tony and I saw the movie tonight and they did a phenomenal job taking this to the big screen. Did they leave out characters? Yes. Was it anybody that really affected the story? In my opinion, no! If you read the book, then see the movie, just appreciate that the story is faithful to the book version and the best quotes from the book were repeated verbatim in the movie. The lovely image featured above came from this blog. I loved it as soon as I saw it.
I was prepared for Tony to make jokes during the movie. He made them during sad scenes before. Scenario: me bawling, he cracks a joke and looks over, awkward silence follows. Tonight: I’m trying so hard to cry quietly and not sniffle too loud, he puts his arm around me and pulls me close. He later admitted that he choked up a few times.
Read the book, see the movie, appreciate the story that John Green wrote for us. Embrace the sadness and understand that some infinities are bigger than others. Be grateful for yours!

One thought on “The Fault in our Stars”