As previously stated in Fandom – itus, I’ve finally finished reading The Mortal Instruments by Cassandra Clare. I’ve read some nerve racking books and series over the years, but these books brought me to higher highs and lower lows than ever previously experienced! Over the six books, there were moments when I told myself to put down the book, it’s not worth it, but once you start it, you have to see it through to the end!
The series begins with Clary (Clarissa) Fray. She’s just an ordinary human, or Mundane, going through life with her mom, no dad in the picture, but a wonderful father figure who’s been in her life since childhood. She has the prerequisite best friend who secretly loves her and she is just a little oblivious.
Things suddenly go haywire in her life when she sees these strange teens kill what later turns out to be a demon. After witnessing this, nothing will ever be the same for her. She learns that she is not a Mundane, she is actually a Shadowhunter, or Nephilim. Now what are Nephilim you might ask? They are a angelic race of humans that were charged with defending Mundanes, us, from demons.
The story of the Nephilim is amazing, and it doesn’t ruin the surprise of the book. Jonathan Shadowhunter, the first Nephilim, encountered the angel Raziel. Raziel put some of his angelic blood into what became the Mortal Cup and when Jonathan drank from it, he became Nephilim. Faster and stronger than a normal human and able to take runes upon his skin. The runes are angelic symbols that grant the Nephilim extra powers or gifts, temporarily or permanently, to aid in their demonic battle. 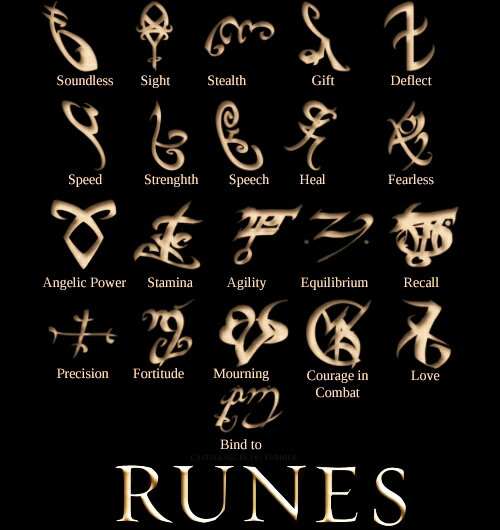 I do have to say that the runes are beautiful and it’s fascinating as you read the series to see how they use the runes in their battles!
I’m trying to work out in my head how much to share and how much is too much….. I do have to tell you that only 2 books have endings that won’t leave you nail biting until the next.
Back to the series!
Jace, one of the strange teens Clary saw in the club, turns out to be a intrinsic part of Clary’s life, teaching her about being Nephilim, while learning more about his own complicated past.

**********SPOILER ALERT**********
The first book leads you to believe this will be a beautiful love story, with the addition of demons trying to ruin the romance. Then oh wait, you can’t love each other, you’re brother and sister!
Never in my life did I feel that I would ship for incest! It sounds gross, but if you read these books you will ship incest too, I guarantee it.
Second book follows with heartache because they still love each other, but keep hurting each other trying to prove they don’t. Remember the love sick human friend I mentioned earlier? His humanity becomes a thing of the past, bringing him even more into the world of shadows.
Third book is where you feel things might be ok again. Love becomes acceptable again, even though we suffer loss. Everyone can be with who they love and nothing hurts. City of Glass is a very good book!
**********SPOILER END**********

Book four and five take all the good feels from book three and twist them all up. I didn’t know what to expect from City of Heavenly Fire. While reading the book, I was torn between wanting to devour it and know how it ends and wanting to put it off as long as possible.
With the book twisting and turning at the turn of a page, it will possibly hurt you to continue reading. However, have faith, you will be rewarded!
The Mortal Instruments
City of Bones
City of Ashes
City of Glass
City of Fallen Angels
City of Lost Souls
City of Heavenly Fire
Also of interest when reading these books, as there is some character overlap, may be
The Infernal Devices.
Clockwork Angel
Clockwork Prince
Clockwork Princess
I do apologize for this blog if it seems a little disjointed, but I don’t want to ruin the series by giving too much away. It will be an amazing read, just trust me!

4 thoughts on “The Mortal Instruments”