As previously stated, I have never baked a successful pie. I’m slowly building my baking and cooking chops due to my Pinterest obsession and it is working. I felt confident enough to try again for this last Thanksgiving. I recently discovered that my husband loves pumpkin pie. Seven years married and I just found this out. That just goes to show you that you never stop learning about your spouse!

My last post was about the making of the crust and that went really well. Surprisingly easy actually and you can get those directions here: https://superstevied.wordpress.com/2013/12/03/a-no-fail-pie-crust-recipe/

The pie that I put in the crust was just as simple and absolutely delicious! Tony has eaten most of the pie himself! The kids and I haven’t been slouches either. Even Chiara ate her entire piece of pie. New foods usually throw her off, but she couldn’t resist the yummy-ness.

You start by preheating your oven to 425 degrees. While that’s going on, you mix together 3/4 cups of brown sugar, 2 tsp. cinnamon, 1 tsp. ginger and 1/2 tsp. nutmeg together. Once the spices are well combined, you add in 2 beaten eggs and 1 3/4 cups of pumpkin puree. I used my real pumpkin, not from a can. There was a different measurement used for the in-a-can stuff, so be sure to refer to the original website for those measurements. Once the pumpkin mixture is ready, pour it into the crust. 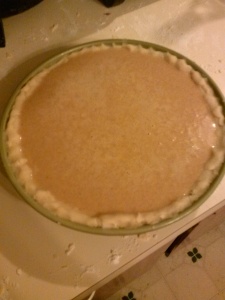 Bake at the 425 degrees for the first 15 minutes, then reduce the temperature to 350 degrees and bake for an additional 40-50 minutes or until you inset a knife in and it comes out clean.
I’ve never made a pumpkin pie, nor have I been involved in the baking of one. I could not figure out why it kept jiggling. The recipe said until the knife was clean, so I pulled it out when the knife was clean.

Sadly, I had to work on Thanksgiving day, so we had Thanksgiving lunch instead of dinner. This lead to a nap before work and no time for pie. Luckily, my husband loves me enough that he didn’t dig in without me. Of course this meant that we had our pie on Saturday! I also had no idea that pumpkin pie settles over time, so the longer it sits, the more the middle sinks in. It still tasted delicious, and the last slice is waiting for me as I write, but next time we’ll aim for more immediate ‘digging in’. Don’t forget the Ready Whip! 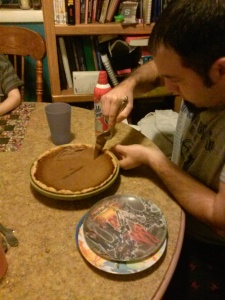 One thought on “Homemade Pumpkin Pie”