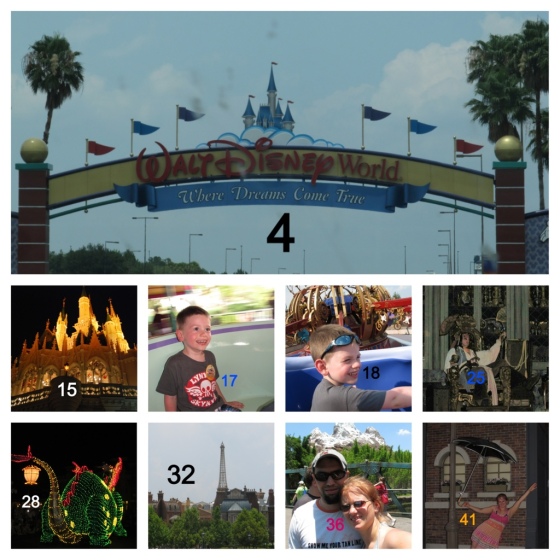 This was something I actually pinned after our most recent Disney trips. I was really excited about it because I realized that this Brittany Smith must be a picture freak, just like me!
I’ve actually been to Disney World in Florida 3 times in my life. The first, my Nana and Papa took my brother and I when I was 7 years old. I have a few specific memories, but the big one is just the wonder of it all!
The second and third time, my dad had an army conference in Orlando, so my parents took my family and I to the parks.
The second and third trips, obviously I was an adult, and my picture obsession had completely set in. I took almost 1,400 pictures in 10 days. I don’t regret a single shot either, because those are moments that will never be quite the same again.
I went through this amazing list compiled by this blogger, and selected my favorite choices.
#4: The Gates of Walt Disney World. This shot can be a little tricky to get. They have big signs saying DO NOT STOP! You may in fact notice little smudges, they’re bug splatter through the windshield. I can understand them not wanting you to stop. It would take twice as long to get in the park otherwise!
#15: Get as close to Cinderella’s Castle as you can. Look up! Snap that shot! It’s absolutely mind boggling how many angles you can take of one location! I have at least 12 shots of different views of the castle, maybe double that of Hogwarts over at Universal! This is one of my favorite angles, probably second favorite after the full shot. It’s an amazing angle, that honestly, not a lot of people will think of.
#17: In motion. Riding the Tea Cups. This is one of the rides I remember riding as a child. Arthur actually rode this twice. Once with my parents, then he rode with us. After we got off, my mom told Tony she would never ride with him. We were spinning like a top!
#18: In the air, on Dumbo. This is a ride I distinctly remember NOT riding. This was closed for repair when I went as a kid. I made a point to ride this with Arthur. Not the most exciting, not the biggest thrill, but it is a landmark ride, and Arthur really enjoyed it.
#25: If you spot Cap’n Jack, snap his picture! We rode Pirates of the Caribbean A LOT!! At least 8 times over the course of the week. There are in fact 3 Jack Sparrows on the ride, and I snuck a picture of all of them. This one is my favorite!
#28: Any shots of the parade are great. I have a great many pictures of a great many parades. Main Street Electrical Parade is fantastic, they all are, but the effects on this one are ASTOUNDING!
#32: This one listed several highlights on the Epcot world showcase. We saw them all. I fell in love with the Eiffel Tower, so of course I chose the pic of that one!
#36: in Animal Kingdom, make sure to take a picture with Everest in the background. I took several shots, with selected backgrounds, of Tony and I. I’m quite good at selfies. I enjoyed how the one of Everest turned out.
#41: Over at Disney’s Hollywood Studios, don’t miss the ‘Singin In The Rain’ Umbrella. We found this one by chance while wandering. We took shots of all of us. We also made sure to take these on the return trip!
Remember, if / when you go to Disney, it’s not about working your way through the list. All I’m suggesting is that you read it through and try to remember. You don’t want to spend your vacation focused only on your list and your camera. Memories are important, but you want to experience your family time, not just record it!
Original pin and complete list can be found at http://3qtguys.blogspot.com/2013/01/50-must-take-disney-photos.html?m=1