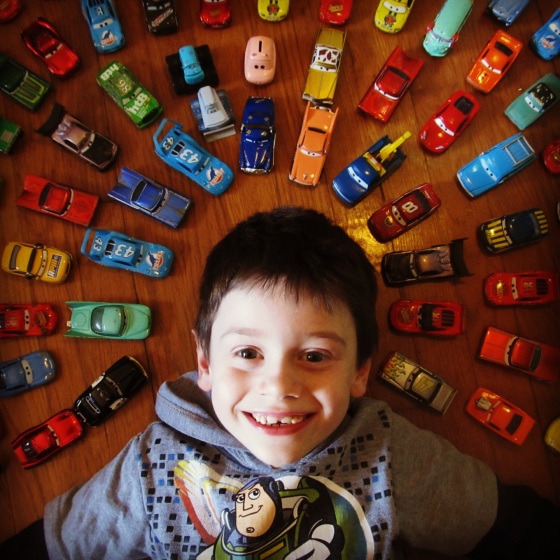 This is another pin that there really isn’t much to say. My son has a lot of cars. I thought about using regular hot wheels, but decided the Pixar Cars would be much more fun.
There are so many of these. You can see a lot of them here, but I probably had enough to do a double layer around his whole body! When Arthur was first born, we decorated his room in Pixar Cars. When we finally moved into our current home (and out of the apartment) we painted his nursery in Cars colors and purchased a ton of Cars. We left them in the packages and hung them around the room like a border.
They stayed up in his room until around the age of 4 when he discovered that standing on his bed, using his Pirates of the Caribbean sword, he could knock them down. Every day, Tony or I would find new car packaging tucked into his drawers or hidden in his closet. So we just had a mini-Christmas and opened them all. Hench the million Cars filling one of his thirty-one bags…….
Laying them out was a lot of fun. He even helped a little, and shockingly, Chiara sat and watched instead of undoing our hard work! I took several shots back to back (the burst setting on my camera is not the best) but this was by far my favorite, especially after putting it into Instagram and playing a little. I got an amusing shot at the end of our puppy seeing what was going on.
After our photo session, Arthur had a good time setting up his own little cars world, so it was a good hour!
This site has several ideas for great boy photo shoots. I loved this one for a little while, but I deliberately made myself wait till I was closer to a birthday for my boy. Now I have his 6 year old photo! I am looking forward to developing this and hanging it up. I hope you guys have fun with whichever idea you decide on and have as much fun as I did!
My inspiration came from here